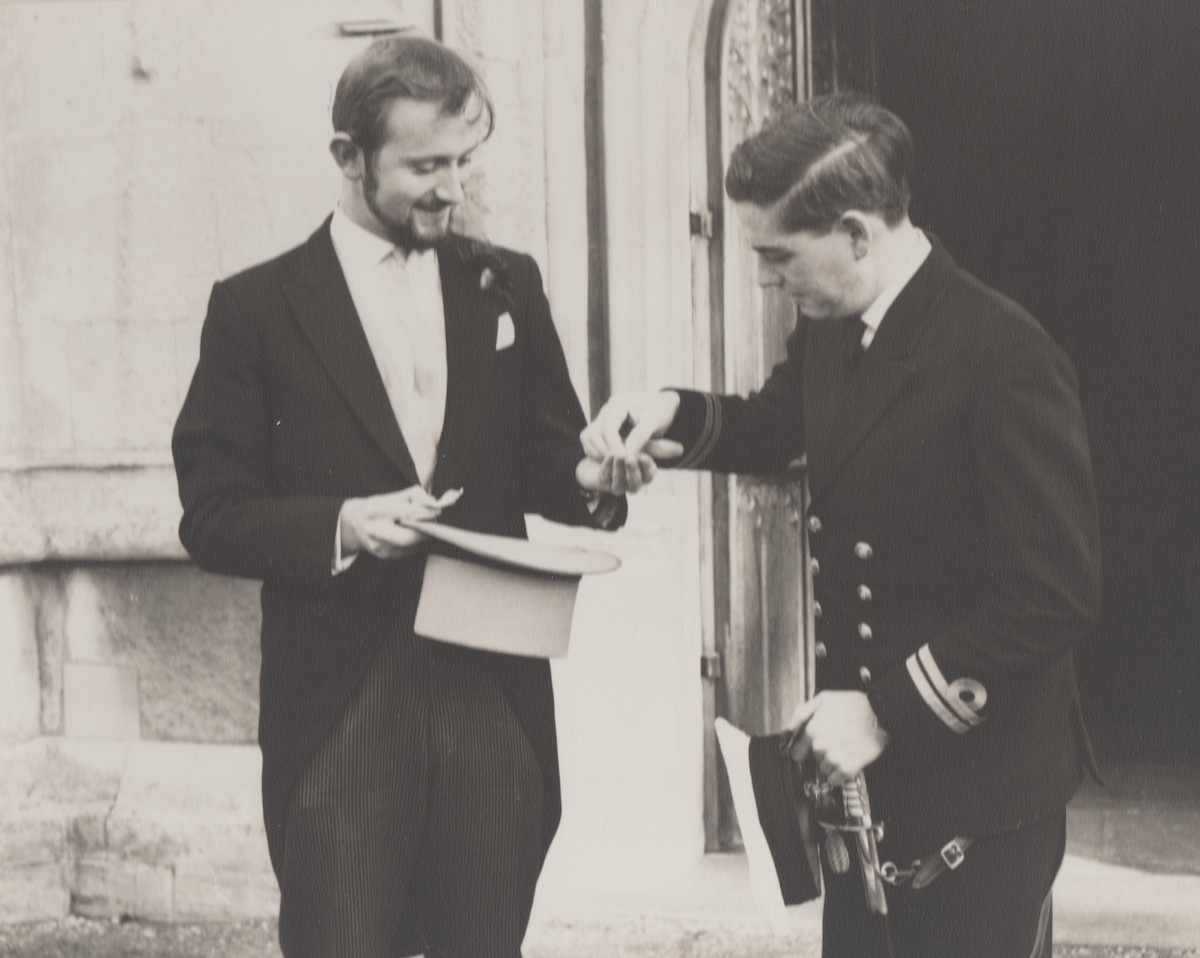 Nick showing me he has the ring 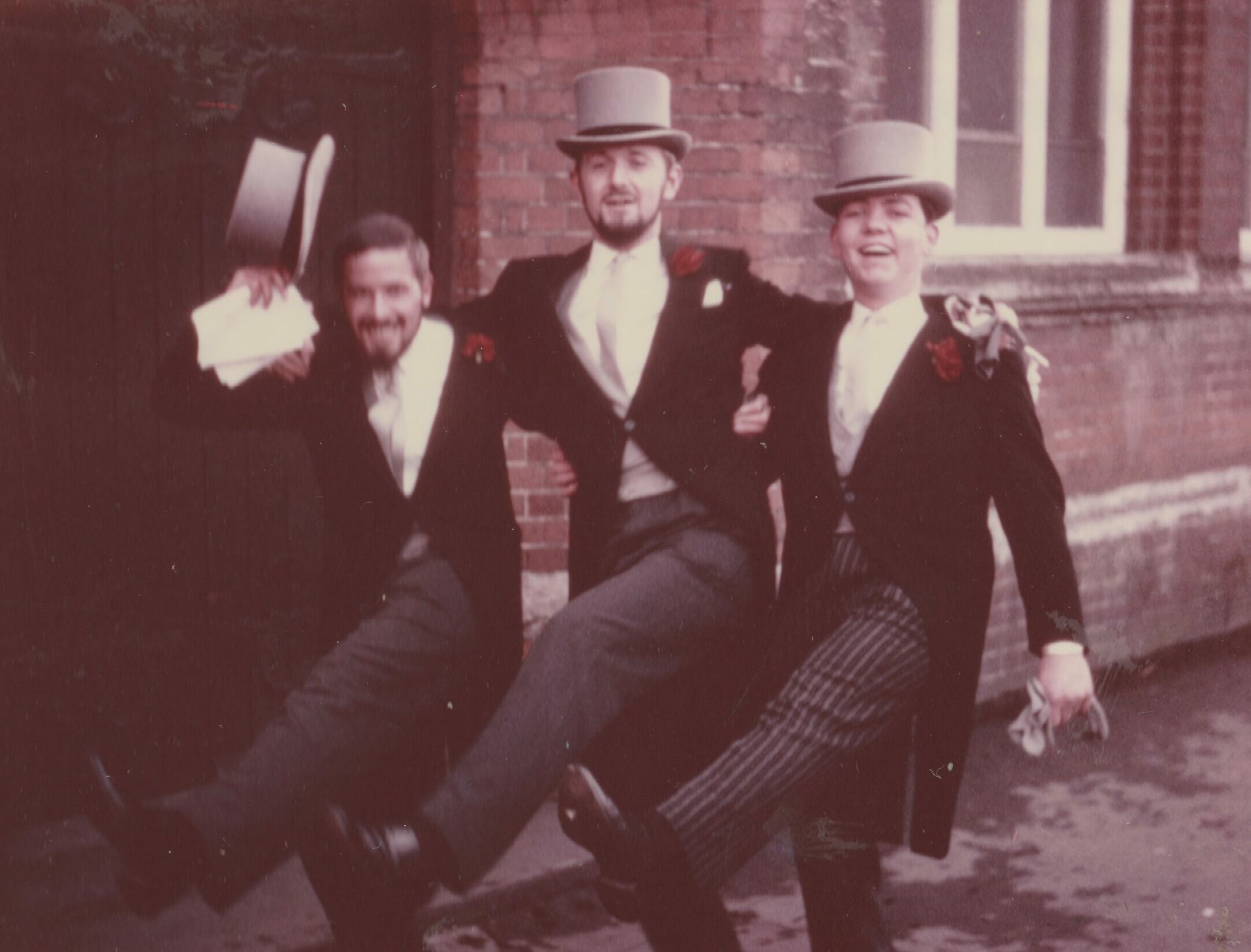 My groomsmen; Alan, Nick and Cedric 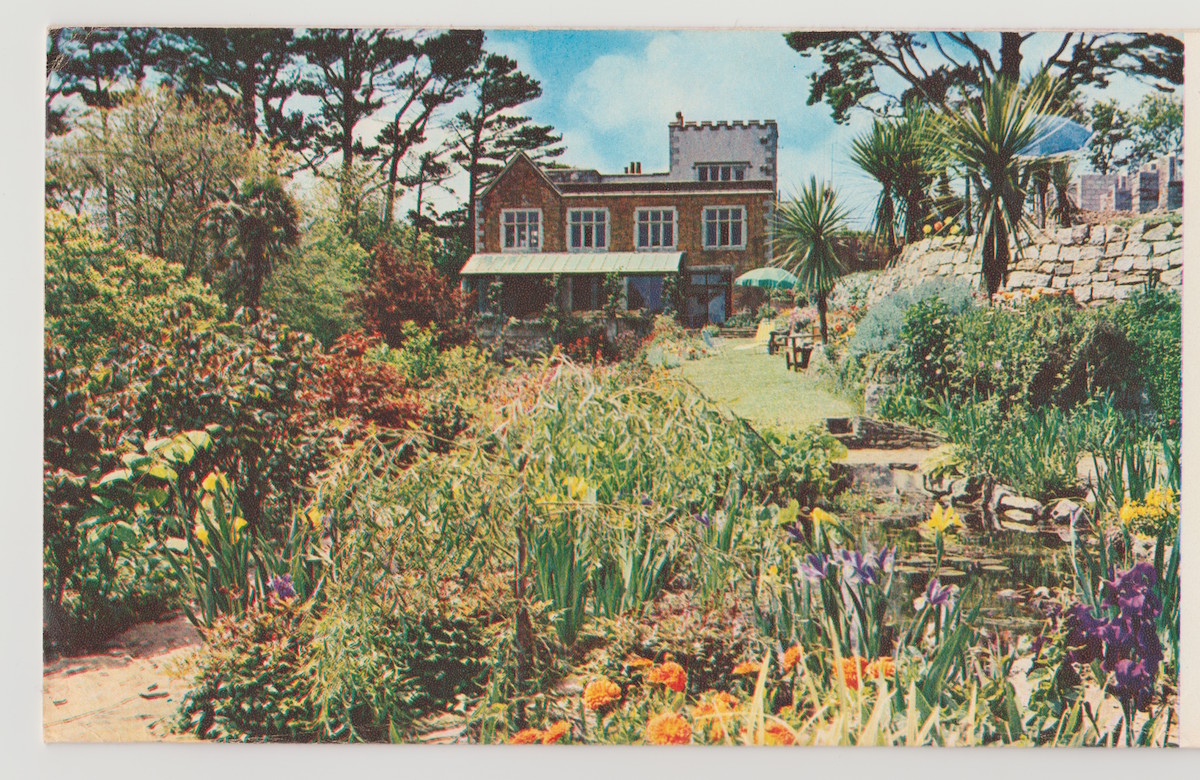 Meudon Vean, the hotel we stayed at on our honeymoon

Map of the Cornwall area

In the meantime, while I was at sea, Liz organised our wedding together with my best man, Nick and the Reverend John Bailey. It was very common for the stag night to be held the night before the wedding, but Liz said I wasn’t to have it so close before the wedding. One of my friends suggested we have it three nights before the big day, so that’s what I did. (He actually meant all three nights before!) I was on Christmas leave and a group of us, including a few naval officers and two or three civilian friends of mine, went out for the night in London, and I stayed at Nick’s flat. Liz came around the next day and we all looked the worse for wear. I was really glad she’d insisted that we didn’t have it the night before the wedding.

The day before our wedding, Liz was at her parent’s house and I went to take her a cup of coffee in her bedroom when Bob came out of the bathroom.
“Where are you going?” he asked.
“I am taking this to Liz.”
“I don’t think that is appropriate, do you?” he said.
He took the coffee off me and into Liz’s bedroom. He must’ve known we had been living together in London. We’d shared a tent together and stayed in Malta together, but it was a no-no to take Liz a coffee while she was still in bed!

I wore my naval uniform (forgetting my medal) to our wedding, which started at two thirty in the afternoon. The service went smoothly apart from when John Bailey forgot some words. A naval guard of honour made up mainly by officers from HMS Duncan greeted us when we left the church. Evening parties just didn’t happen like they do today, our reception was at three-thirty and Liz and I drove away just before six. Our wedding, with a photograph, was reported in the local weekly newspaper, the Newbury Weekly News.

Liz organised a hotel in Southampton for our first night and I distinctly remember drinking champagne cocktails. We were on our way to Cornwall where we stayed at a lovely hotel near Falmouth in south Cornwall, called Meudon Vean. In the mid-1960s there was very tight foreign exchange control and you could only have fifty pounds each to cover all your overseas expenses. So, Liz arranged for our honeymoon to be in England, and it was really fantastic as I was able to show my new bride a little of Cornwall that I love so much.

When we arrived at Meudon Vean the manager took one look at us and asked us if we had just got married and when we confirmed that was the case, they immediately upgraded us to an amazing suite. Charles brought us breakfast in bed on a trolley each morning. We spent one day driving to Rock, north Cornwall to see my Uncle Frank and Aunty Phyl as they were unable to attend the wedding. We went to a Christmas Eve dance at the hotel where another guest, (of doubtful sexual orientation) said, when he heard that I was a Sagittarius and Liz a Scorpio, “Your marriage will never last.” How wrong was he! We stayed at Meudon Vean for New Year’s Eve and it was a very special way to welcome in the year of 1968. 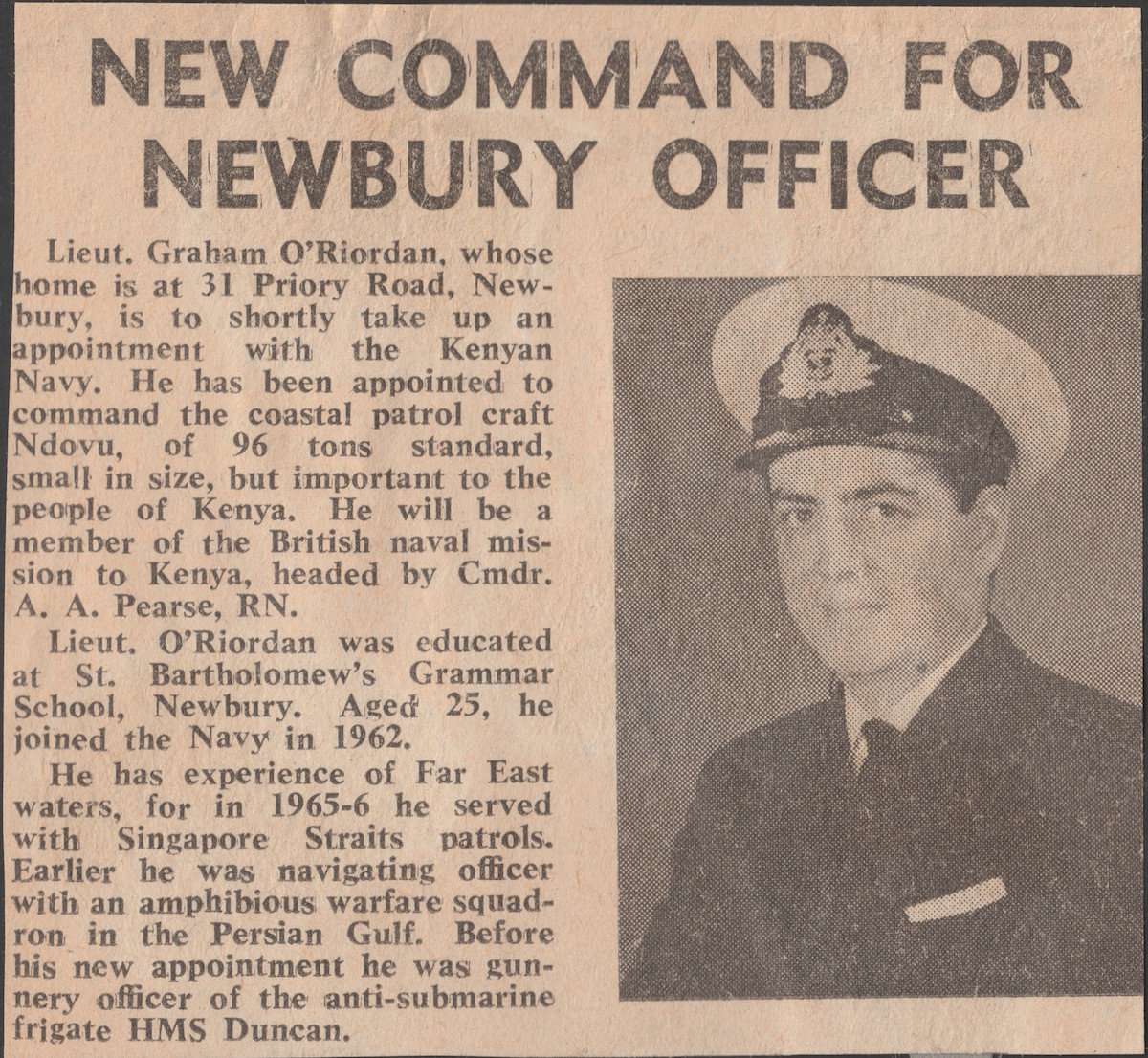 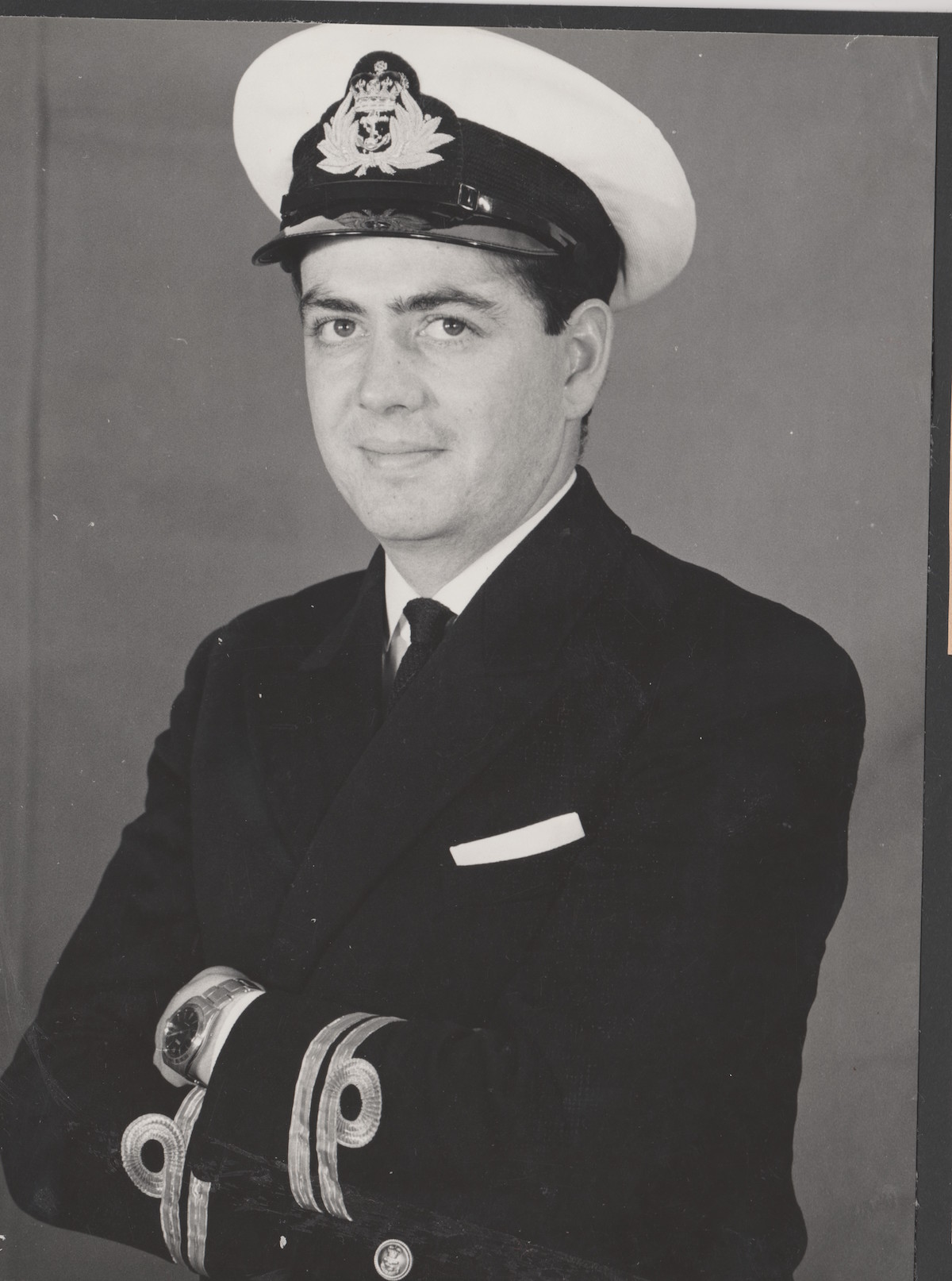 In the Royal Navy officers weren’t allowed a married quarter, or marriage allowance until they were twenty-five years old. We fixed the date of our wedding for the 16th December when Graham would be twenty-five and three weeks. I was still beavering away towards my state registration finals and my Guy’s finals while Graham was away at sea most of the time in HMS Duncan, and I was at the hospital virtually until the day we were married. Because I knew that Graham was being posted to Kenya the following summer I asked for a dispensation. It normally takes another year at Guy’s to obtain your Guy’s badge, which I never received; I didn’t even know if I’d passed my state registration or my Guy’s Finals until after we were married. Considering I was organising the wedding myself I was really thrilled when I did pass and became qualified. I also came sixth out of sixty in my Guy’s Finals, which was pleasing. Later that year, ‘non-academic Mary’ came first out of sixty.

One of my patients at Guy’s had been the harbourmaster in Mombasa, and he suggested I learn some Swahili, which I did with him on top of everything else. My mother, although helpful, wasn’t used to that sort of occasion and as I was paying for the wedding myself, I wanted to do it my way. In those days it was the bride’s side of the family that paid for the wedding while the groom’s family paid for the honeymoon, which in our case I organised as well.

Nick, as best man, and I had to go out to Uffington church, in The Vale of the White Horse to run through the wedding ceremony as Graham was still at sea. Nick played the part of the groom and our vicar, the Reverend John Bailey, cautioned him not to say “I do” as it would take some time to have it annulled. John, unlike the majority of Anglican clergymen, was a strong socialist. A local conservative candidate in the parliamentary elections had organised car stickers to be printed with the slogan: “Who will rid me of this turbulent priest.”

Sandy Pettit a Guy’s friend was our organist and together with the rest of the bridal party we had a practise the night before, following which the main bridal party went out for dinner. Two weeks prior a great friend of mine who helped me a lot when I was a Queen’s Guide, Jenny Perham, and who was now a fully-fledged hairdresser, helped me with my hair. She evened out the colour as it was so bleached after three weeks in Malta. On the morning of the wedding day, aside from Jenny who did my hair, there wasn’t anyone else who helped me, and I did my makeup myself. I raced down to the town mid-morning for something and bumped into Miss Ireland, who enquired what I was up to. “Getting Married this afternoon”. “Oh congratulations” and that was that. The weather had been rather snowy, and we heard that day that two people who we really wanted to come weren’t going to make it; my godfather Lewis and Graham’s only uncle, Frank and his wife.

I was about to come out of the front door of the house at two fifteen and Bob lifted up my veil and thrust a glass of sherry at me, “I think this would be a good idea” he said, and off to the church we went. Bob, who was giving me away was in the car with me and just as we were coming to Saint Nicholas Church at the end of Bartholomew Street, we suddenly saw a great gaggle of naval officers all galloping across the road towards the church with swords clanking. My stepfather said to the driver, “Go around the market.” Being a Saturday, it was market day, and everybody was looking to see ‘who is getting married today’ and of course I was late, but there was no way Bob was going to have me arrive at the church door at the same time as the groom and his party. 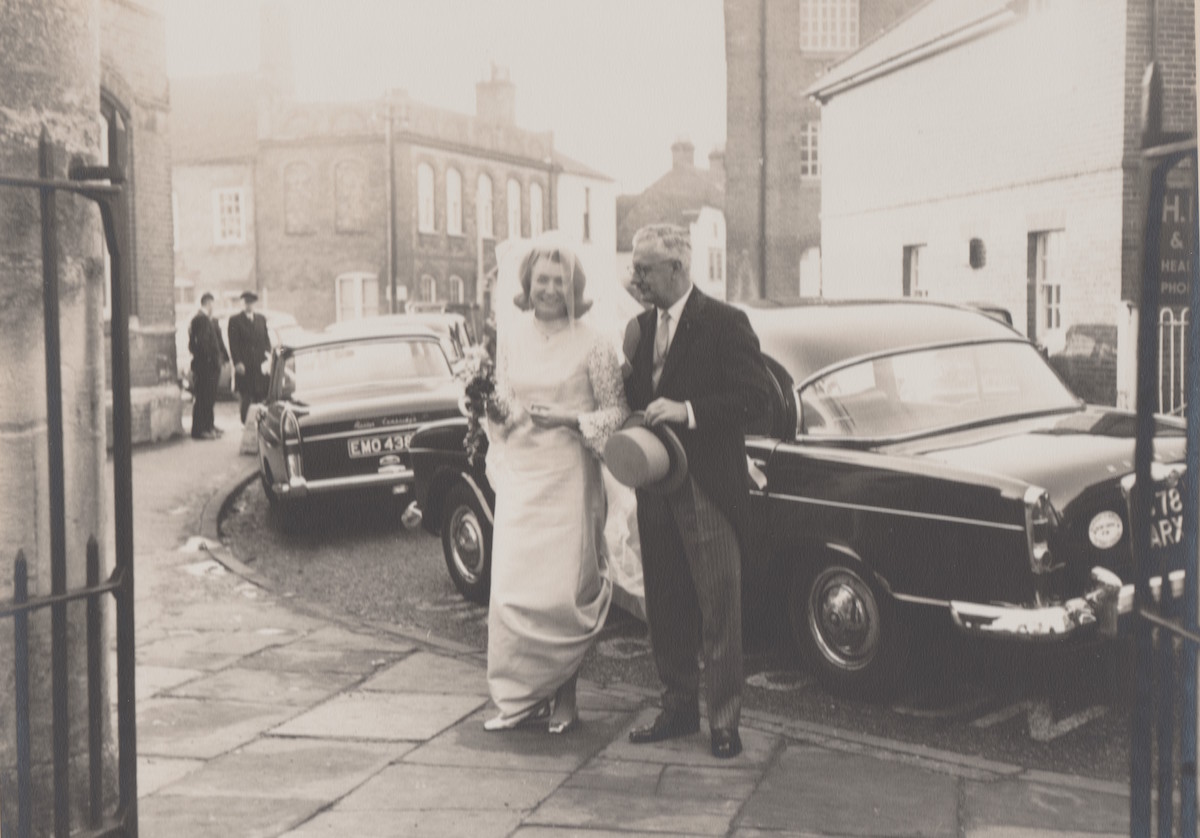 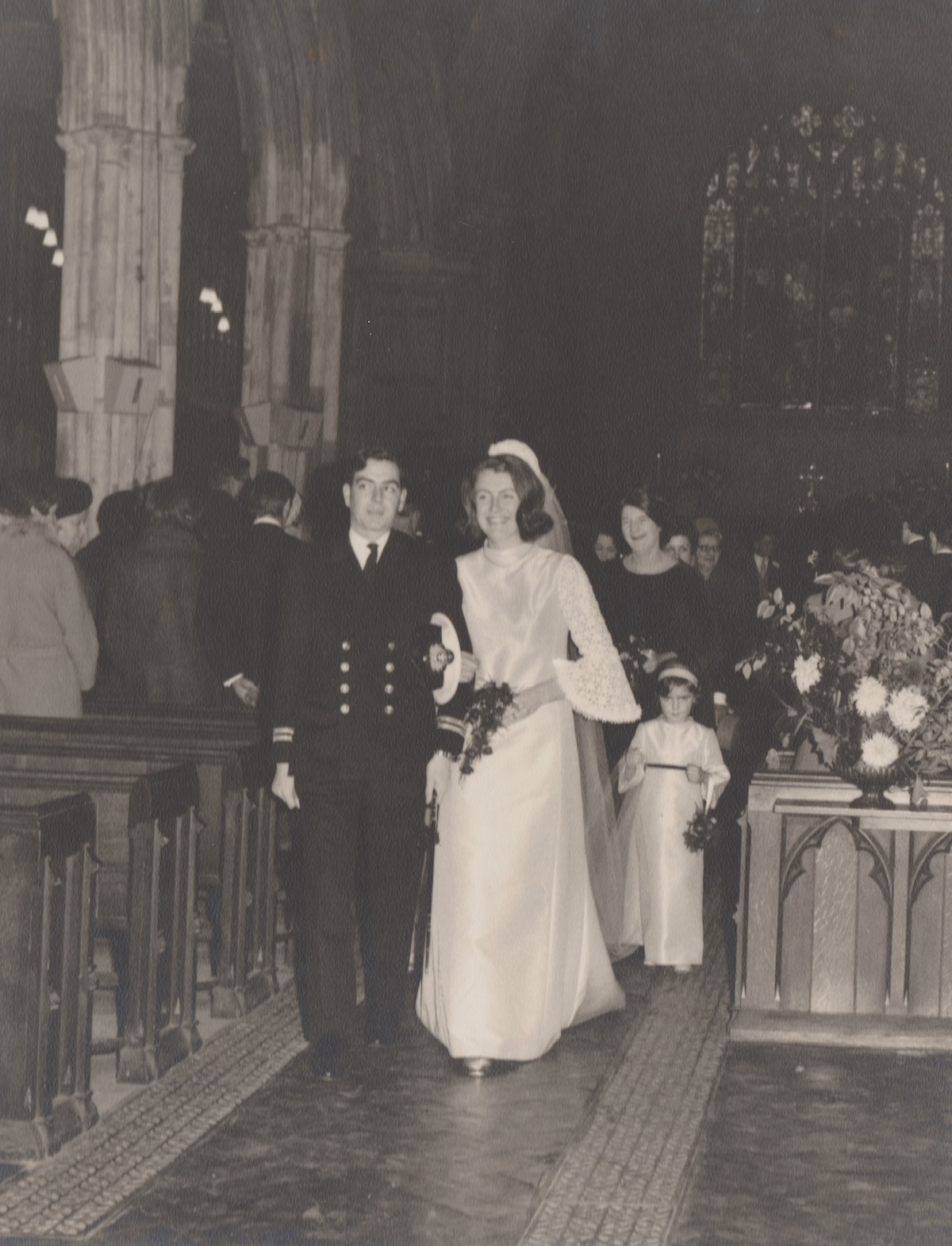 Lieutenant and Mrs O’Riordan
Saint Nicholas Church is a magnificent sixteenth century wool church, built by Jack o’ Newbury who was a very successful wool merchant in the century when wool was pre-eminent in the area. Graham and I were both confirmed by the Bishop of Oxford in that church. John Bailey, who had been the curate but was then the vicar of Uffington conducted our service. He’d applied to the Bishop of Oxford for us to use the pre-reformation service but the strict Reverend Mathews, current vicar of the church, told us that the Bishop of Oxford didn’t like the pre-reformation service and wouldn’t let us use it. Mathews insisted on being at the wedding and was behind John Bailey the whole time breathing down his neck, I think making him probably a bit nervous. I wanted the pre-reformation service because in it there wasn’t a promise to obey, instead you had to promise to be “buxom in bed and board”, and I thought that was much more fun than obeying. There wasn’t really a choice. It was the post-reformation service that was used and then halfway through it, John Bailey whispered to Graham, “Oh I’ve just missed a bit out. I must go back” and so we carried on. In the 1960s no photographs or videos were taken in churches in case they detracted from the solemnity of the occasion. Although it’s a wonderful ceremony it’s still meant to be a serious one. We left the church under a ceremonial arch of naval swords and after posing for photographs outside we drove to our reception, which was held at Elcot Park Hotel. At the reception a friend of Graham, Jack Tupper, who was a Royal Naval Reservist said to Graham, “Just stop with Liz every now and again and have a look around and see what is going on, because otherwise you’ll wake up tomorrow not remembering any of it.”

When we were engaged, we had stayed with the Tuppers at Selsey Bill, and were allocated separate bedrooms. A lot of people, even though they weren’t much older than us, were very correct as were most older people. Many were probably horrified at the idea of an engaged couple actually sleeping in the same bedroom, except for my grandmother, Grandma Harris, who seemed not to be too bothered about it at all. Then there were people like Bob, who wouldn’t even let Graham bring me a cup of coffee the morning of the day before our wedding because he didn’t think it was appropriate; views and opinions were very mixed. 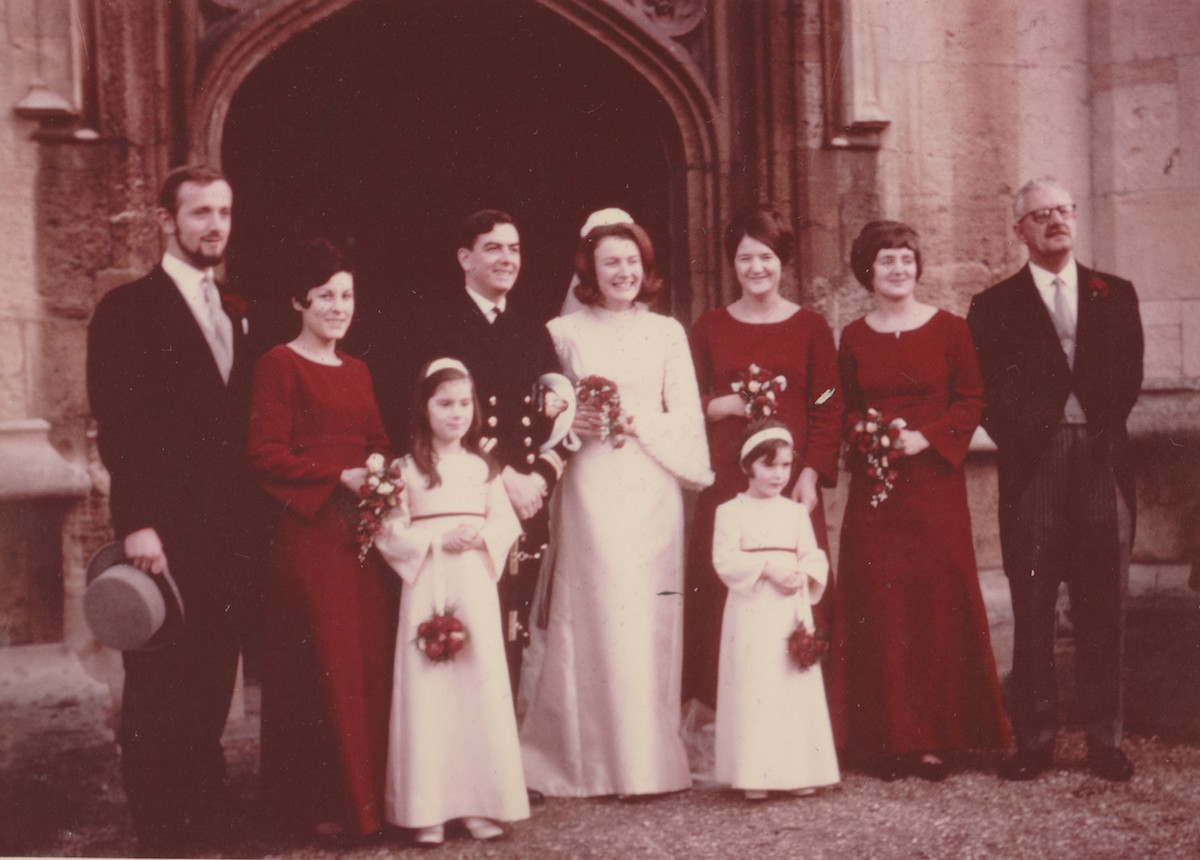 The Bridal Party from left to right: Nick, Judith, Graham, Me, Mary, Ann and Bob and flower girls Helen and Clare 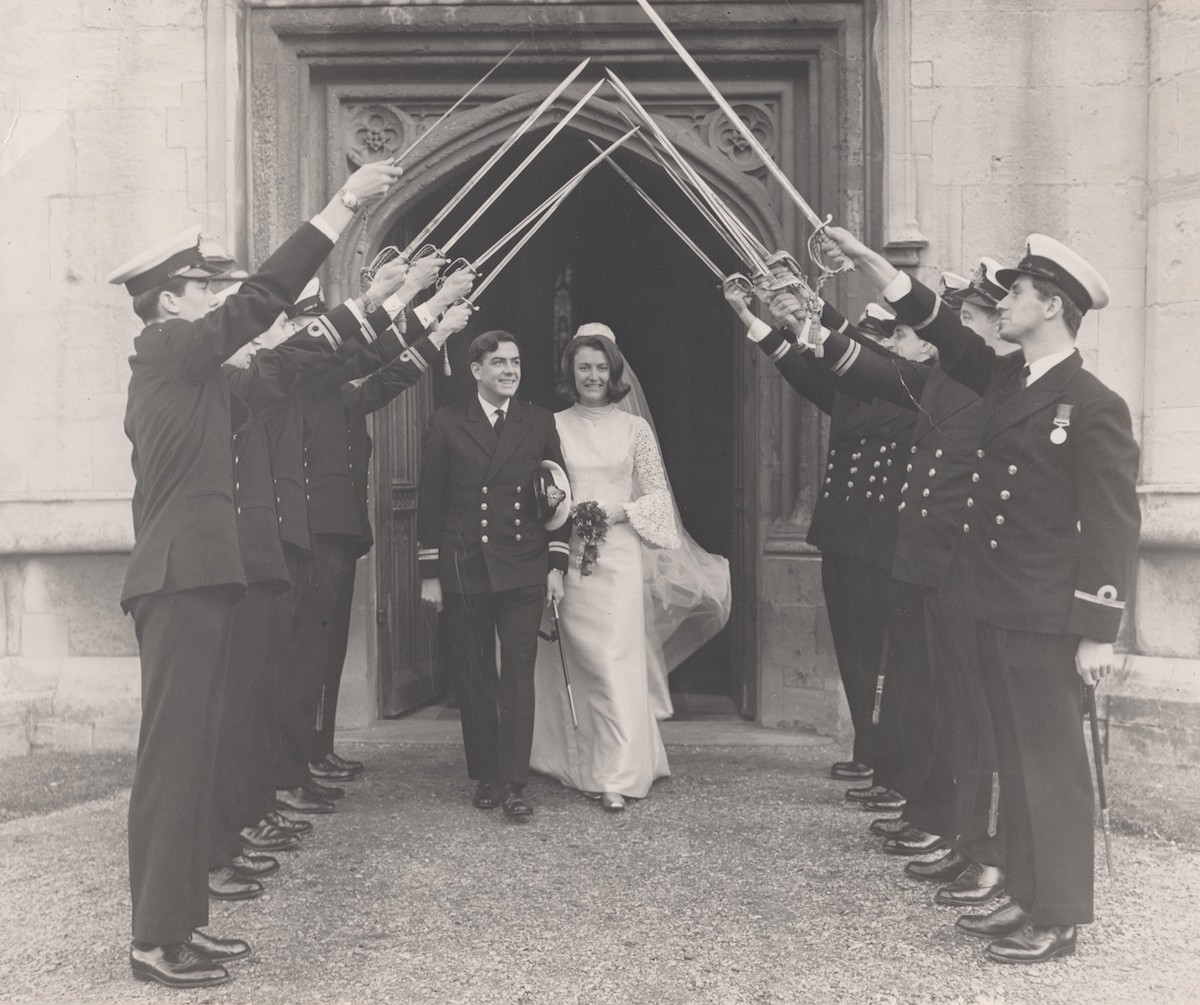 The Naval Guard of Honour as we left the church
When we left for our honeymoon, I was wearing a rather prim matching grey wool dress, a grey coat to match and a beautiful grey hat, with a great big pink felt question mark on the front because I thought it was rather fun. Where am I going? What am I doing? Who am I now? Graham’s mother was horrified when she saw the hat and just couldn’t see the funny side of it. We left for Southampton in my green Mini, which Graham drove, to the usual clattering and clammering of cans tied behind the car. Married at last. 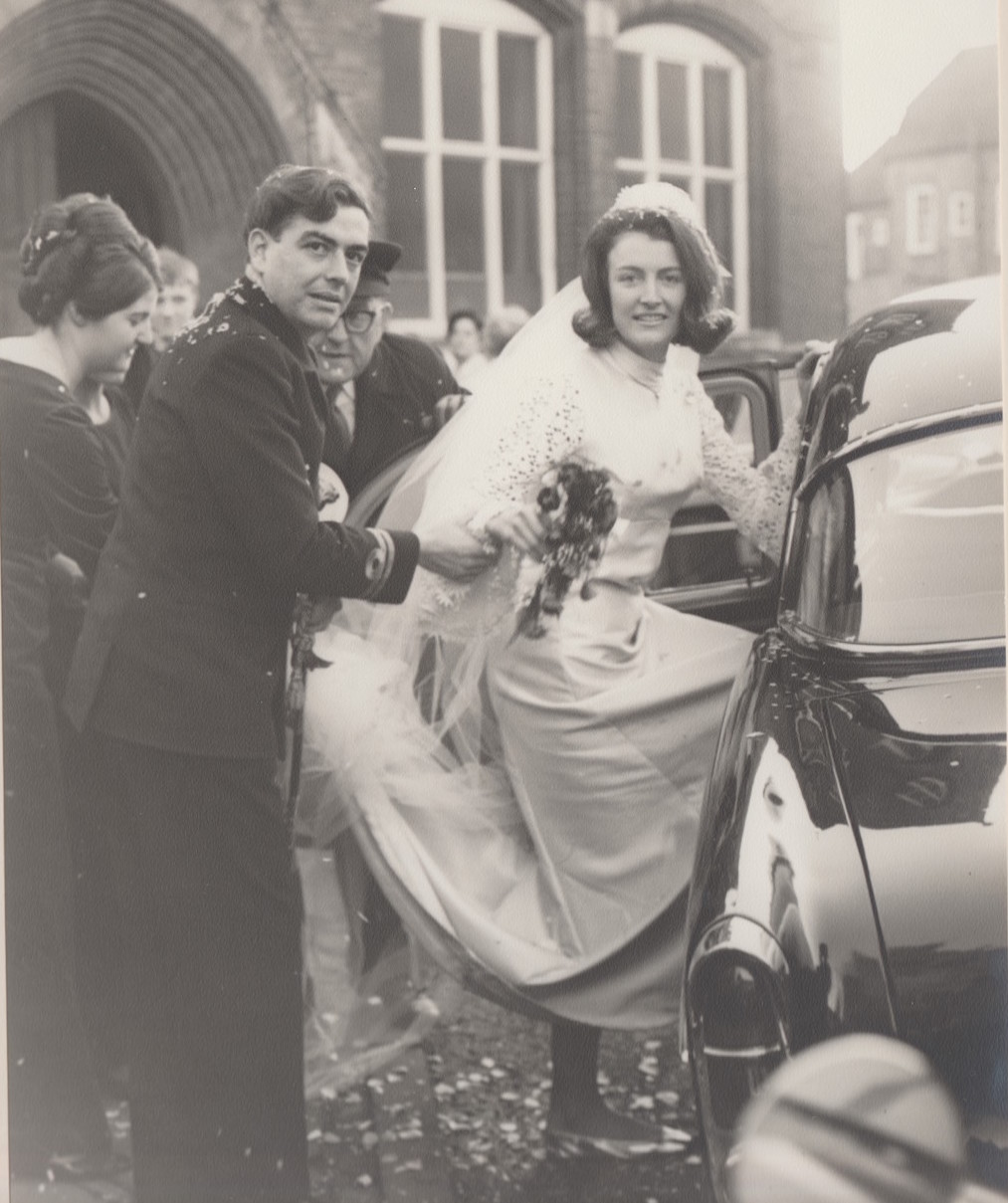 Leaving for our reception

The complete line up 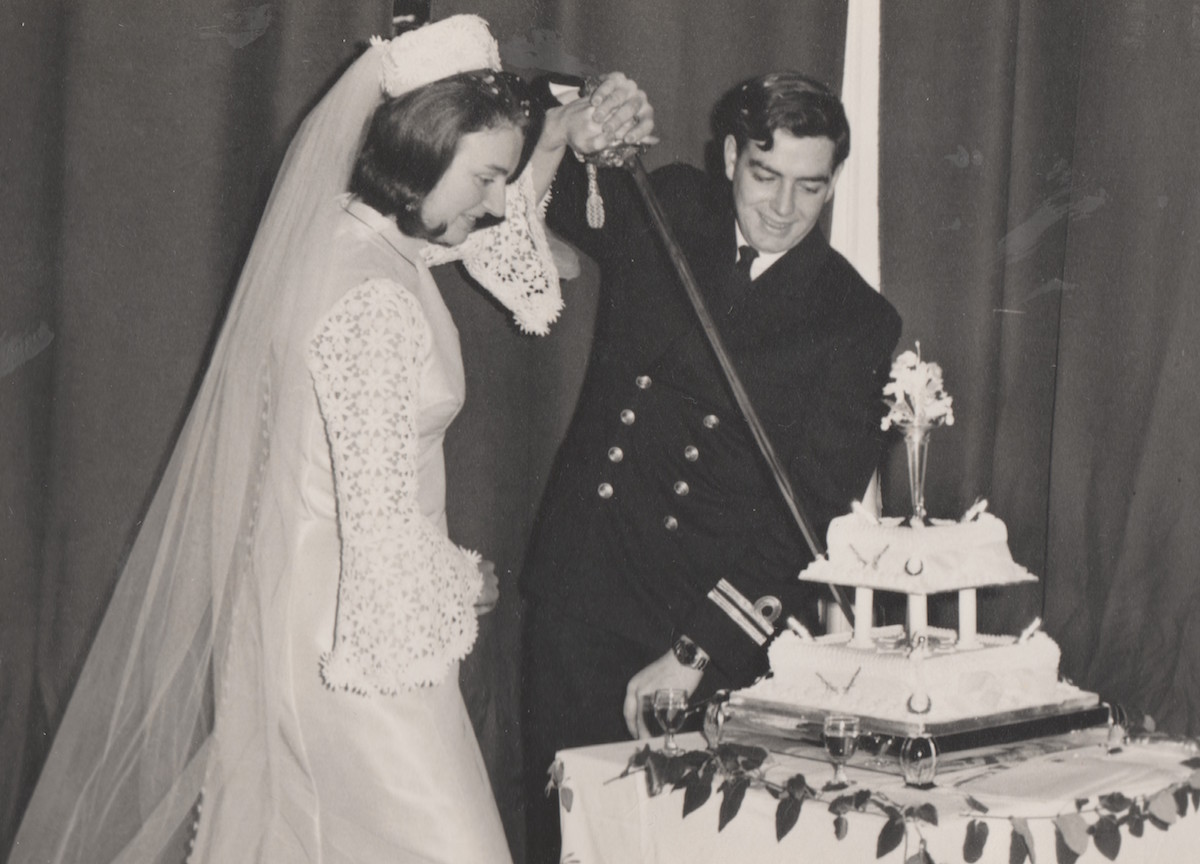 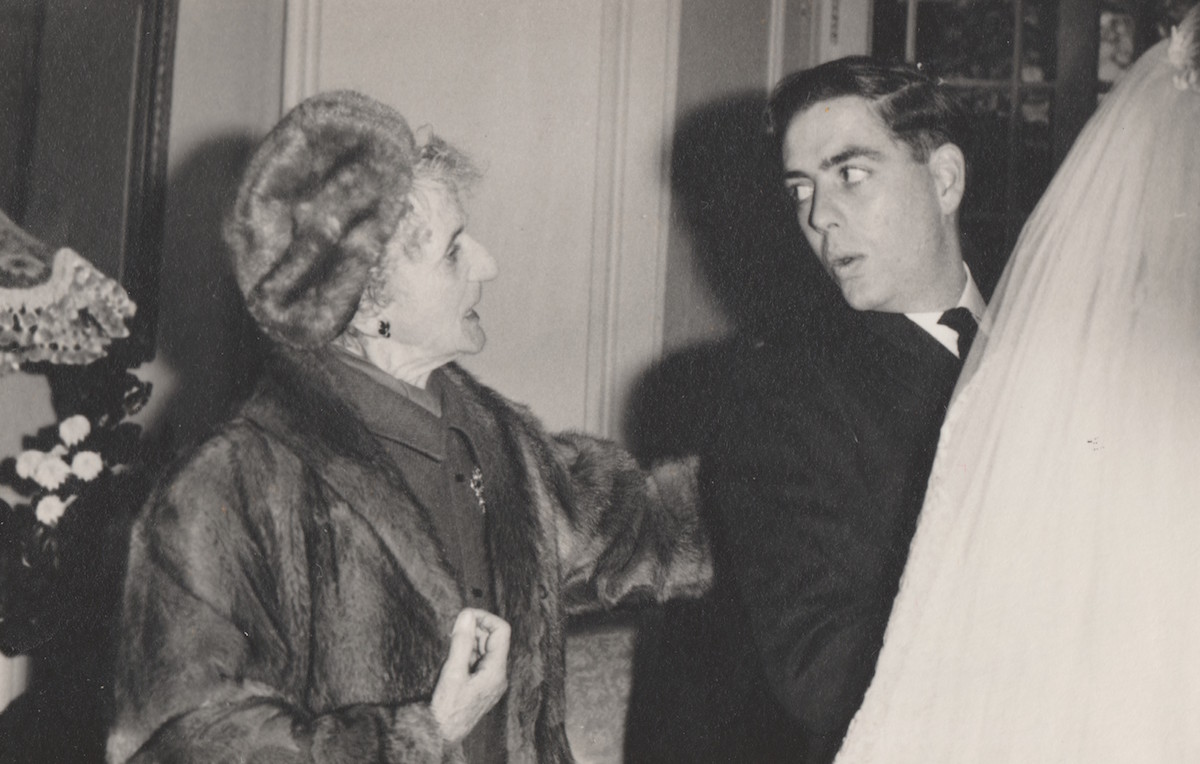 Mothers: Doreen and Margaret with the bride and flower girls, Helen and Clare 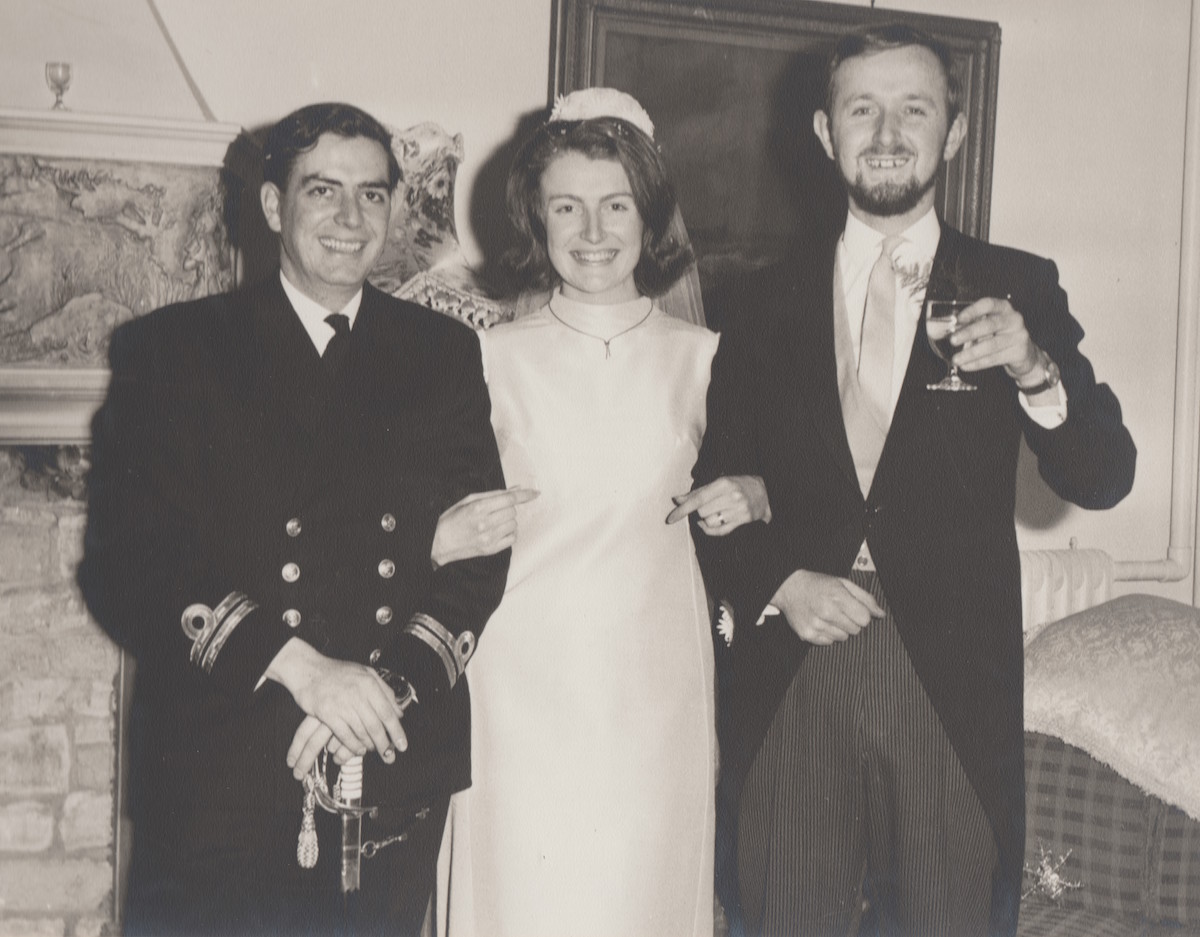 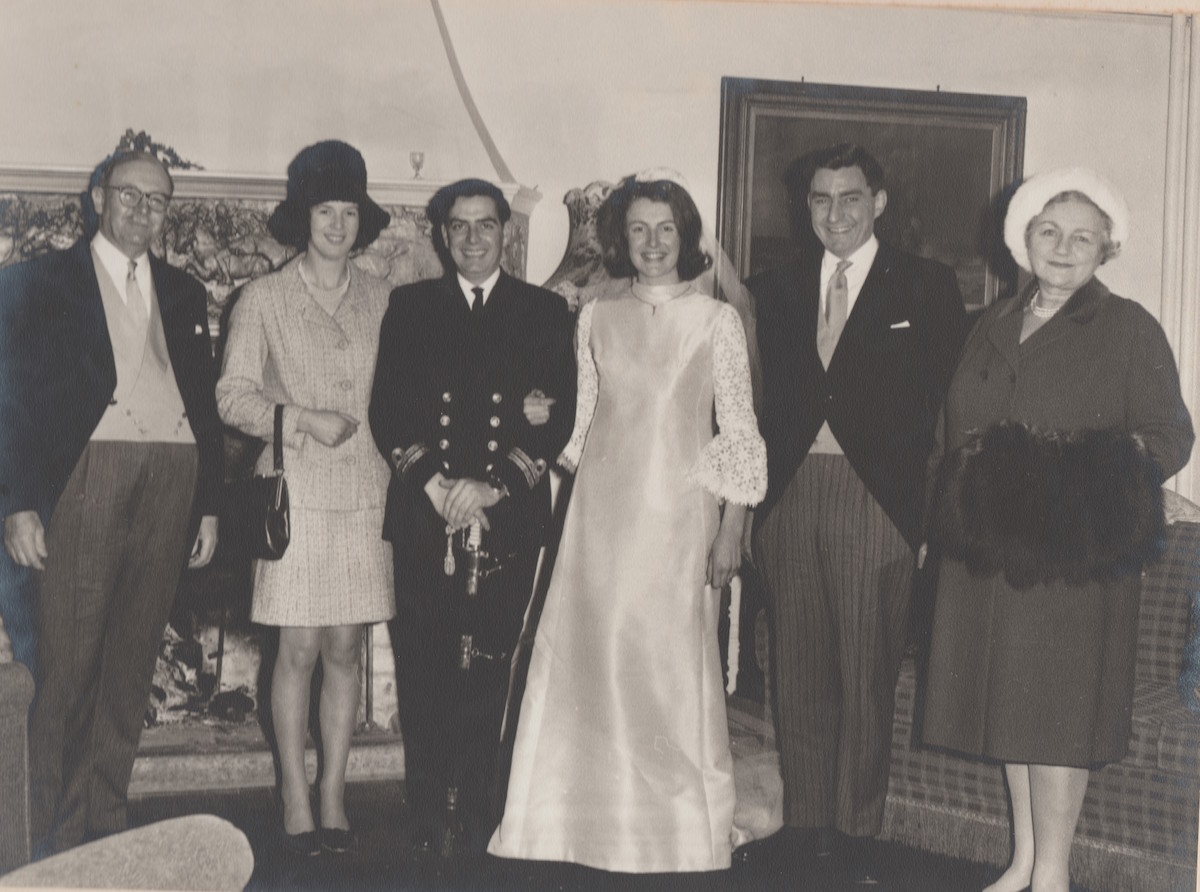 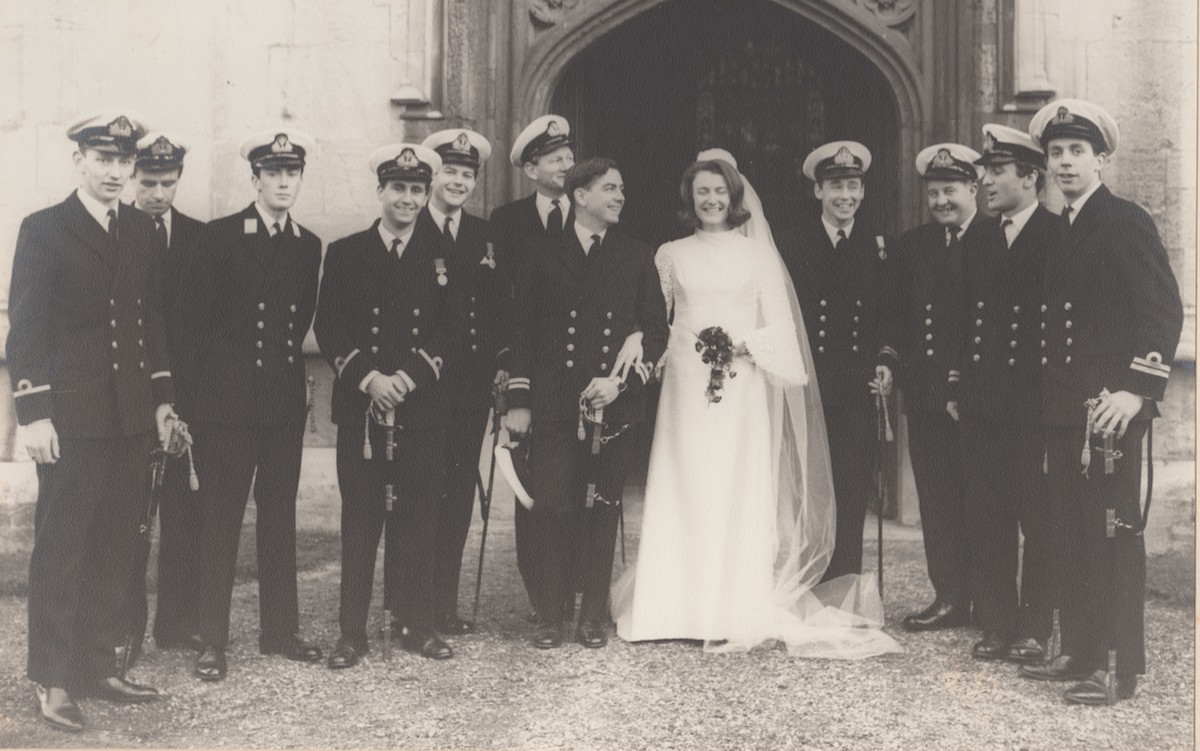